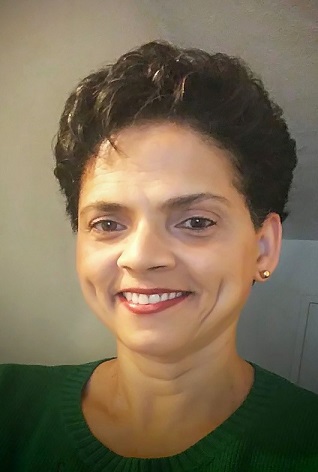 Dulce Almeida Ferreira, MA, has worked to address the health and well-being of communities for several years.  Currently, she is the director of the Domestic Violence and Sexual Assault Services Program at the Massachusetts Alliance of Portuguese Speakers (MAPS).  Prior to her current position, Dulce had been working at MAPS since 2008 as a health educator and supervisor of the Women’s and Men’s Health programs primarily addressing HIV/STI Services and providing outreach, prevention and education, counseling and testing and other services to prevent the spread of HIV and sexually transmitted infections among high-risk community members.  Dulce also directed the work to provide newly immigrant communities who are mainly low-income, limited-English-speaking individuals with counseling, case management, information and referrals around many important daily life issues—ranging from affordable housing, employment, and connections to Portuguese-speaking health and legal services, to Citizenship Assistance and applying for government economic supports.

Dulce holds a Master’s Degree in Management from Cambridge College and a BA from American University in Washington, DC.   She also has extensive experience in marketing, commerce, and tourism while working in the Cabo Verde Islands (also called Cape Verde) in Africa.  Dulce is fluent in Portuguese, English and Cabo Verdean Creole.  In her spare time, she has enjoyed volunteering in the community through the annual Cape Verdean Jewish Seder in Boston, the Portuguese folk fair, the MAPS Cape Verdean Women’s Group, and the Cabo Verdean Adult Day Care.

We asked our Sheroes some questions, here’s what Dulce had to say:

Why do you think addressing sexual assault is important?

Oh boy, I would say that before addressing sexual assault, it’s important to address sexuality because usually in our communities sexuality is something that nothing is said about it, I’m coming from my own experience. You learn from your peers and not from your parents. You don’t hear anything about sexuality, much less about consent. Nobody ever talks to you about consent and what’s sad and difficult about it is that for most people this issue rises up to discussion after the fact and we see now in society and people in general have become so complacent with regards to certain behaviors like sexual harassment. It’s been going on for so long but it has to take a movement or disclosures for people to pay attention to it or the only way people pay attention to it is when things turn really bad.

As a teenager, I remember hearing my girlfriend saying that when it comes to sex, women are in control yet I don’t remember anyone talking about consent. It definitely seems like a foreign concept to most. To make matters worse between family members there’s no discussion about boundaries, clear boundaries with family members and close friends. With that, we implicitly give friends and family members immunity. So, when girls are adults and sexually abused by family members or a close friends, they don’t know where to turn to or what to do because no one told them that there was such a possibility of that happening so basically they’re on their own. If there’s more conversation about sexuality and consent at least if someone is faced with that incident they know they can trust someone to talk to and won’t feel ashamed.

Why is it important for Communities of Color to address sexual assault in their community?

For Communities of Color there’s a lot of misconception about what should be allowed within one’s own culture/community. Women and people in general within communities of color respect the advices of the elderly. So if you’re mother and grandmother told you that this is the way it is, you’re going to take it as is. So, we’re used to not challenge what elders say. I can give you an example, someone shared to their grandmother that she hated to feel forced to have sex with her husband anytime that he pleases but her mother said that’s the way it was and she just went with it, she never questioned it. She hated it but that’s what people did – that’s what women did. Another thing too, is the gender role, there’s an assumption of who gets to do what, the idea that in the house the male is the provider, the women is supposed to take care of the home and the kids and be there to be of service to the husband. The whole concept of “who wears the pants” in the household and implicitly brings in a paradynamic that minimizes the women’s role and the shaming of women when they’re in marriage. They’re the ones that are supposed to hold the family together and the position women are put in when women hear “oh it’s a man’s thing” and “man needs to satisfy his sex needs, otherwise he’s going to get sick”, all of these things have a negative effect on girl’s self-esteem so it’s important for girls to know what a healthy relationship looks like, it’s important to talk about consent and mutual respect.

What are the challenges in doing work addressing sexual assault?

It’s not an easy thing, it’s not easy to talk about but, in our community, it’s even harder for the reasons I already explained. Because of norms people are raised with and how they were raised. Also when we have clients that come in and present some signs of mental health, a lot of them say they’re fine and don’t need help. The concept of mental help is such a big taboo that adds another layer of barrier to the work we do, people say when you talk about your life and depression they say “oh that’s a white man thing” so, mental health is a very huge thing.

What goals would you have for the anti-sexual assault movement; or yourself in doing this work?

I don’t see enough men in this. Even in our own work, when I go to providers meetings and I look around I only see predominately only females. I would like to see more men doing this work, I would like to see more men showing up in interviews and doing their own campaign or work to support the cause, you know until we have that I don’t think we are going to be at the point that we want to be.

How do you take care of yourself in doing this work?

I like to cook, and come Friday I may be going through the worst but it’s an exciting day for me because that’s when I like to cook and listen to music.